“All the code that’s fit to printf()”

The New York Times doesn’t just have a blog about open source, it’s open-sourced some of it’s own tools. On Trac. How cool is that?

Open: A blog about open source technology at The New York Times, written by and primarily for developers. This includes our own projects, our work with open-source technologies at nytimes.com, and other interesting topics in the open source and Web 2.0 worlds.

DBSlayer looks shit-hot btw. I’ll be keeping that in mind for an upcoming project.

Open letter to Bank of Ireland

I’ve been discussing BOL – as covered in this post – with a customer service rep from BOI, but I don’t think that’s going to result in any changes, so I asked them to forward this to the Chief Executive, or tell me how to get it to them. This probably won’t result in any changes either, but it’s worth a shot. If you think BOL is a steaming pile of shite too, perhaps you should put pen to paper yourself.

Someone in BOI needs to talk to someone that understands the Internet, because it’s clear that the bank has no idea how things work outside the branch network. A lead time of more than a year – never mind several years – for the development of a web application is simply ridiculous, even with the extra security contraints the bank requires.

This is on top of the blatant ignorance the bank displays with regard to web standards and usability. The fact that I can’t log into the current BOL system with any browser I choose, never mind any operating system I choose, is an absolute disgrace in a time when market share for the recommended browser and OS are shrinking fast. The fact that the system appears to have been designed by a child doesn’t help matters either.

Tha bank needs to get it’s house in order on this matter. It may not like the Internet and there are obvious and valid reasons for this, but it’s not going to go away. Continuing to deny it with the pigheadedness of the record labels is going hurt in the long run.

BOI: The Hand Giveth, The Hand Taketh Away

Bank of Ireland continues to befuddle me as a company. In some areas they absolutely excel, but in others they’re the worst of the worst. In meatspace I’ve dealt with their branch staff quite a bit in recent years because of several long-winded account changes, and apart from a few – inevitable – errors, they’ve been a pleasure to deal with. Friendly, helpful and competent, their staff run with problems until they’re fixed, taking responsibility and apologising for issues that pop up along the way. On the face-face-face front, companies could learn a lot from BOI.

Step outside the branch network though, and it can be very slapdash, particularly when technology is involved. The IVR systems are long-winded and circuitous, the websites are ugly and befuddling, and having watched people run through their own internal forms on my behalf, I can only imagine how much time is wasted going forward and back in their systems trying to get things done. Their Business OnLine system, though, should be used by experts in usability and design on how not to design a web app.

If you use BOL, you know what I’m talking about. If you don’t, visit it and take a look, but please, don’t click on anything yet if you run anything bar Windows and IE, as you could actually break something. And in a brilliant way, as will become apparent. When you arrive on the site, a little window will pop up telling you that “Business On Line [is] Loading”, and that you should “Please wait”. While you’re waiting – it’ll be a while, because it will load for a period of âˆž seconds – have a look around at the design and layout.

Quite apart from the fact that they’re generally just awful, you’ll notice that it wasn’t just the application developers that didn’t understand cross-platform and cross-browser development, the designers don’t either; check out the lovely rounded corners in Firefox, for example. The layout is atrocious too of course, with links scattered about the page seemingly at random. Still “loading”? You may have noticed the “PC Compatibility” link while waiting, and been tempted to click it, but don’t if you’re running Firefox please, because it’ll crash. Yes, the “PC Compatibility” page will crash your browser.

If you actually are running Windows and Internet Explorer you’re probably ok, but make sure you install Java first. No, not Sun Java or any other commonly available Java VM, they won’t work; you need the Microsoft JVM. The one that isn’t available any more. BOI will give it to you when you’re trained on their system, but getting it after a reinstall can be a bit tricky if you’re in a rush, you’ll need to google for “msjavx86.exe” and install it yourself. Don’t forget to update afterwards while you’re at it, as that version isn’t secure, and you can’t install the update without installing that. Efficient, eh?

If you’re a user of BOL you may have been told that a new version is on the way, like I was a year or two ago when I first started using it, but I’m afraid that was either a lie or bullshit, because there’s no end in sight. In a week when they’ve upgraded their consumer-level online banking system to something approaching a decent web app – but still not even close to a good one – a customer care rep has confirmed to me that the timeframe for rollout of a BOL upgrade is being calculated in years. And not just a couple of years either:

“at the early stages of this project we may have been given an unofficial timeframe of one maybe two years but now the project has enlarged and has turned into a large scale project incorporating a number different sections. It has grown enormously since the very initial stages of scoping the project and they are not in the position as of yet to issue us with timeframes for the completion of the project”

Let’s be clear on something here folks: this is a web app. Myself and two colleagues are talking about building a web app project at the moment, and the longest part of our lead time is 3 months, while we wait for one to come back to Ireland. When he does, we’ll spend a month on the near side hashing it out, a month firing it together, and a month on the far side on cleanup and pitches, for a total of 6 months. If it were a web app for a bank, we might spend another six months security consultations and code reviews, maybe even a full year. But 2 years plus, when it was obvious 2 years ago it was shite? Fuck off.

More on the upcoming A1. Or not, as the case may be. The word “innovative” is a bit of a stretch for a car that’s essentially just extending a concept Toyota brought to market a decade ago.

AutoMotoPortal: The drive unit for the metroproject quattro showcases a fully independent, innovative hybrid technology. At work under the bonnet is a 1.4.litre TFSI engine developing 110 kW (150 bhp), whose power is directed to the front wheels by means of the S-tronic Direct Shift Gearbox. A 30 kW (41 bhp) electric motor positioned on the rear axle is able to deliver up to an additional 200 Nm of torque when the vehicle is accelerating. When boosting, in other words driving the vehicle simultaneously by TFSI and electric motor to achieve a dynamic driving style, the study is transformed from a front-wheel-drive car to a quattro, and power is transferred to the road in the most effective way possible. 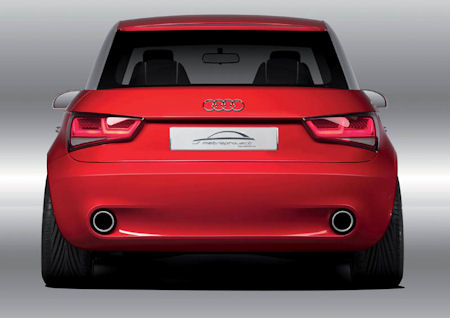 (Yes, the Prius really is 10 years old now. Seems like less because it was only available on the grey market before 2001. So there.)

They say this isn’t shopped. I’m pretty sure I don’t believe them.

I think I might actually prefer to be in this than the wonky-looking yoke on Celtic Helicopters’ website. 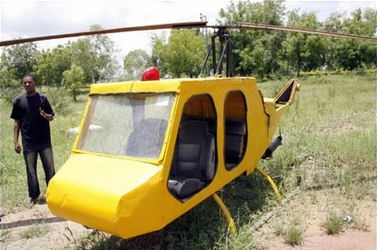 Yahoo: Mubarak Muhammad Abdullahi, a 24-year-old physics undergraduate in northern Nigeria, takes old cars and motorbikes to pieces in the back yard at home and builds his own helicopters from the parts.

“It took me eight months to build this one,” he said, sweat pouring from his forehead as he filled the radiator of the banana yellow four-seater which he now parks in the grounds of his university.

The chopper, which has flown briefly on six occasions, is made from scrap aluminium that Abdullahi bought with the money he makes from computer and mobile phone repairs, and a donation from his father, who teaches at Kano’s Bayero university.

It is powered by a second-hand 133 horsepower Honda Civic car engine and kitted out with seats from an old Toyota saloon car. Its other parts come from the carcass of a Boeing 747 which crashed near Kano some years ago.