“The Climate Has Changed Before”

The next time you see some clueless dickhead on the web trying to deny climate change by claiming that we’ve had temperature changes in the past and sure and begorrah we’re still here aren’t we, show them this XKCD. It’s mildly amusing and abjectly terrifying.

To Scale: The Solar System

I’ve seen lots of representations of the solar system before, but this one is great. The distance from earth to the moon alone surprised me.

Destin is the best.

I can see myself watching this daily for a week, looking for more and more of Cork’s oddities.

What I love most about perspectives like this is the inside of city blocks, the cramped mess of buildings that they end up, but usually with little cubbies of light and even greenery. Speaking of which, I had absolutely no idea there was that much green behind Shandon. None. Really must pop in there some day, I’ve put it off for years.

Well done that man. I’d love to know what quad he has, the handling and video are, again, superb. The comments say it’s DJI Phantom, but given the flight time and distance, I’m skeptical. Whatever it is, it puts the cheap Chinese heap I bought to try to shame. :)

77 feet, according to someone that actually bought The Penguin Classics Library Complete Collection. Here it is on their shelves:

(Yes, my associate ID is included in the links. You’re all loaded, right?)

Myself and T visit the Zoo at least 3 or 4 times every year with our Fota membership, it’ll be great to see some of the behind the scenes stuff. I just hope T doesn’t explode when the heffalumps come on! Anyone got a copy of episode one by any chance?

26 or younger? Temple St Hospital has your DNA.

I’m surprised I haven’t seen any Facebook pwotest gwoups or Twatterfests about this subject. In a nutshell, a hospital in Dublin is storing a blood sample, name, address, date of birth, hospital of birth and test result from nearly every person born in Ireland since 1984.

That means if you’re under 26, there’s a good chance your DNA is in there: your health, any genetic diseases you might have, your behaviours and traits*, etc. Well, possibly. They had a couple of servers stolen in the 2007, so maybe it is there, maybe not. Sure it’s not all that important anyway, it’s just your entire personality*.

Is Mark Zuckerberg – the slimey douche, if you’ll pardon my Klatchian – ultimately right, do people really not give a shit about privacy any more? Are are people just too thick to realise the problems – current and future – that can result from this kind of thing?

Hospital keeps secret DNA file: A DUBLIN hospital has built a database containing the DNA of almost every person born in the country since 1984 without their knowledge in an apparent breach of data protection laws.

The Children’s University hospital in Temple Street is under investigation by the Data Protection Commissioner (DPC) since The Sunday Times discovered it has a policy of indefinitely keeping blood samples taken to screen newborn babies for diseases.

Unknown to the DPC, the hospital has amassed 1,548,300 blood samples from â€œheel prick testsâ€ on newborns which are sent to it for screening, creating, in effect, a secret national DNA database. The majority of hospitals act on implied or verbal consent and do not inform parents what happens to their child’s sample.

The blood samples are stored at room temperature on cards with information including the baby’s name, address, date of birth, hospital of birth and test result. The DPC said it was shocked at the discovery.

Records stolen from hospital that held secret DNA database: Two computer servers containing the records of almost 1m patients were stolen from the Children’s University hospital in Temple Street in 2007 and have never been recovered.

The data were far more than that lost on stolen bank laptops in recent years. The theft was investigated by the data protection commissioner (DPC) and the gardai after being reported by the Dublin hospital in February 2007. The organisations had decided that there was no need to inform the public, believing there was little chance of the thief being able to access the data.

Patients’ details, including names, date of birth and reason for admission are thought to have been included.

* To keep my wife happy: strictly speaking ‘behaviour’ is stretching it; and DNA probably accounts for about half of your personality, the other half being learned.

This is doing the rounds of homeopathy forums. Fiver says it was seeded by an “enemy” for a joke, and they’re watching the response open-mouthed…

There is a parliamentary ‘scientific committee’ which examines the scientific evidence for certain contentious problems, and the anti-homeopathy brigade have asked this committee to examine the evidence base for homeopathy.

So, as you can see, it’s a stitch-up. When the results of the enquiry are published, it is highly likely that they will find â€œthere is no evidence for homeopathy.. .blahâ€¦blah. ..blahâ€¦ and therefore we recommend that homeopathy be removed from the NHSâ€. As it’s a parliamentary committee, the government always takes thier conclusions seriously, and will probably implement them.

Anywayâ€¦.we are not taking this lying down. We have decided to carry out an Intention Experiment, and we are doing this every day, at 9 p.m. GMT until 30th November, day when the committee makes its final deliberations.

PLEASE WILL YOU HELP IF YOU CAN? This involves 15 minutes of focussed, meditative, positive intention-making in order to support homeopathy and try to confound our enemies.

1. Choose a place away from electronic interference, mobiles, phones, TV etc. Add a plant, meditation music whatever helps you personally get into a meditative state.

2. Sit either in an upright chair or cross legged or similar

3. 1st 5 minutes: slow your breathingâ€¦ in through your nose and out through your mouth for 15 seconds each minute, then

4.From 9:05 â€“ 9:15 pm focus clearly on the statement below in whatever way suits you, see the Committee accepting Homeopathy works, or people being able to
have Homeopathy treatment on the NHS, feel positive and joyful, really see, hear, smell, sense (whichever way you imagine/visualize) the reality of it.

â€œWe intend the outcome for the UK homeopathy evidence check to be wholly and fully in favour of homeopathy. We intend for the vast and thorough body of scientific data supporting the efficay of homeopathy to be seen, heard and recognised as valid, solid and scientific. This is so, and it is doneâ€

Uri Geller must be pissing himself.

That bollard on Grand Parade

You know the one. Did you realise it was a cannon? It made perfect sense the minute I read this page on the excellent Cork Past and Present website by Cork City Libraries, but not before! 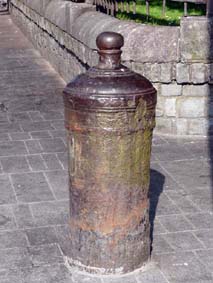 Cork Past and Present: One of the most familiar pieces of street furniture in Cork is the old cannon gun made from cast iron which now serves as a bollard on the corner of the Grand Parade and Tuckey Street near Bishop Lucey Park. The cannon gun has been dated to the reign of George III of England who reigned from 1760 to 1820. It may have been used as a mooring post for boats in the days when a channel of the Lee flowed along the Grand Parade. In recent times it has been used to secure one end of a skipping rope as youngsters played on the refurbished Grand Parade. Tom Spalding in his book Cork City: a field guide to its street furniture claims that it may be the oldest piece of free-standing street furniture in Cork.