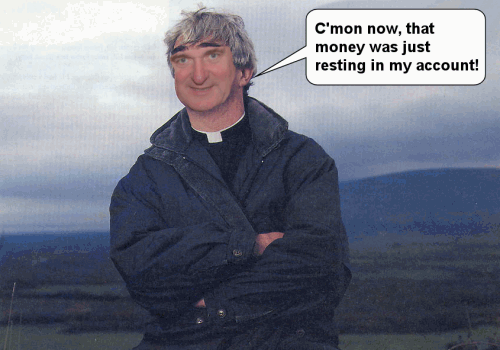 Blogorrah has posted some videos that I guess are being aired on Oirish TV, and by jesus they’ll fit right in if that’s the case. Here’s what I don’t get though: I presume that these videos aren’t supposed to appeal to 34 year old fuddy-duddies like me, but who are they supposed to appeal to? Presumably it’s ‘yoof’, but surely they’re even more patronising to yoof than they are to me? I mean, seriously, rock salutes? The only people that think rock salutes are cool these days are Spinal Tap fans. (And rightly so.)

The PR people that came up with this shite should be shot (along with most of the rest of them), and Rick O’Shea should be put in charge; since he’s the only one that was in any way entertaining. Seriously, give Rick the camera, and fuck off and get a proper job. Something useful and inline with your skillsets, like a firing range target.

UPDATE: I’ve just been listening to Rick’s show and he had Bosco on about the Rock the Vote business. Yes, Bosco. And they were talking about free lollipops. Are they trying to be ironic or something? Because it’s really not working. I find myself wondering if any people in the yoof category actually know who Bosco is?

(Thanks for the pointer Twenty.)

Damien has posted a list of resources for when politicians call, here’s my more general contribution. I’ve had this in draft for months as three basic lessons in one post, but this is the only section that’s complete. I’ll try and tie up the other two later today.

All this is basic stuff, but if you’re anything like me you probably either clam up or get angry when the doorbell rings, and you shouldn’t. They want something from you, but they shouldn’t get it for free. Make them sing for their suppers.

You’ll be needing a notebook and a pen for this. Yes, actual paper. Go on, I’ll wait here.

Lesson One: Be Prepared

The upshot of this story is that the Irish Data Protection Commissioner has come out against the use of biometrics in Irish schools. TBH I have to wonder how Mark Ballard got that from the commentary on the Commissioner’s website – which could have been written by a Fianna Fail PR hack – but that’s not really what caught my eye anyway, it’s this bit:

“a vast majority of parents had no qualms about the scheme after schools assured them it would only be used to track pupil attendance and that data would not used in criminal investigations or otherwise shared.”

Sure they won’t, until it’s something important like a murder investigation, and sure since we’ve done it once now sure we can use it for this stabbing too, and sure and since it was used for the stabbing we should use it for when that fella gave yerman a dig too, and sure now we’re using it all of the time, sure and begorrah we might as well make it a national database.

Are people really that stupid that they can’t see the long term consequences of programmes like this? Can they not see past the next corner? Or is that a stupid question? Seriously folks, don’t expose your children to this. It’s a slippery slope, and Irish bureacrats and politicos have very bad shoes.

PS. The Reg deserves credit for the headline, not me; see their URL. Bizarre they didn’t use it instead of the shite they used in the end. Did it sound too much like kiddyfiddling or summat?)

Frankp is running a caption comp for an iPod Shuffle on BifSniff at the moment. I’m not sure my entry – oops – will get past the censor, but I’ll have a go anyway.

Can’t stand iPod Shuffles meself – the lack of control would drive me demented – so if I win I’ll auction it off for the Cork Simon Community here and on Foot.ie.

The Electronic Frontier Foundation has released a paper on “an elaborate television DRM scheme called Content Protection and Copy Management” whose “unparalleled restrictions include”:

These “standards” will affect you personally. They’ll restrict your ability to record, copy and mash (as the kids are calling it these days) content; they’ll say where and when you can watch TV; they’ll make things like those shitty “piracy” ads in your DVDs seem almost quaint in comparison.

When the politicos call to your door in the run up to the election, you need to tell them to stick these “standards” firmly up the DVB’s arse. And remember to tell them that you’ll be needing a copy of the letter telling them that, in exchange for your vote.

Big ups to Twenty Major for winning the Most Humourous Post category in Saturday’s Blog Awards. I was well chuffed to be sponsoring a category again this year, so being the first to present an award to the elusive Twenty was a big bonus. :)

Steve from Sex.ie has finally won a battle against the IEDR, CRO and Micky Martin, although he did have to resort to a domain hack to make his point.

The rejection is a big mistake: domain registries shouldn’t be acting as censors anyway, but what they’re doing is here pre-emptive prevention, and that kind of policy should remain in works of fiction.

(To the tune of Love and Marriage, if you didn’t get it.)

In a great example of disruptive lawmaking, gay rights activists in Washington have introduced Initiative 957, which would require heterosexual couples to have kids within three years, or have their marriages annulled.

Why? Because in upholding Washington’s ban on same-sex marriage last year, the State Supremes concluded that “limiting marriage to opposite-sex couples furthers the state’s interests in procreation and encouraging families with a mother and father and children biologically related to both”.

Of course the Initiative is being introduced somewhat tongue-in-cheek, as you’d guess (and the activists clearly say themselves), but that doesn’t stop the thickos speaking out against it. Big props to head thicko Janet Pierce on that front, for making a special effort to miss the point completely.

About bloody time the CIA and the US was taken to task over this gross abuse of international law.

BBC NEWS: Germany has ordered the arrest of 13 suspected CIA agents over the alleged kidnapping of one of its citizens.

Munich prosecutors confirmed that the warrants were linked to the case of Khaled al-Masri, a German national of Lebanese descent.

Mr Masri says he was seized in Macedonia, flown to a secret prison in Afghanistan and mistreated there.

He says he was released in Albania five months later when the Americans realised they had the wrong man.

Mr Masri says his case is an example of the US policy of “extraordinary rendition” – a practice whereby the US government flies foreign terror suspects to third countries without judicial process for interrogation or detention.