Off To Vote No. Again.

Right, I’m off to vote No to Lisbon, for the second time. Making life even easier for pols at the expense of the people they’re supposed to represent, is not my idea of good policy.

DNA Evidence Can Be Fabricated

This is going around the security networks, but it’s kind of important to everyone else too. Note my emphasis in the quote.

New York Times: Scientists in Israel have demonstrated that it is possible to fabricate DNA evidence, undermining the credibility of what has been considered the gold standard of proof in criminal cases.

The scientists fabricated blood and saliva samples containing DNA from a person other than the donor of the blood and saliva. They also showed that if they had access to a DNA profile in a database, they could construct a sample of DNA to match that profile without obtaining any tissue from that person.

â€œYou can just engineer a crime scene,â€ said Dan Frumkin, lead author of the paper, which has been published online by the journal Forensic Science International: Genetics. â€œAny biology undergraduate could perform this.â€

Or perhaps they’ve taken up cloning? Fianna Failures do tend to look and act suspiciously similar…

Cork Politics published this a couple weeks ago*:

NEW figures unveiled by Cork City Council have revealed that the local authority issued 1,565 on the spot fines in 2008. A total of 670 of these were issued for offences committed at The Fairfield and Clashduv Road bring sites. The figure represents a substantial increase on the number of fines issued in 2007, something which the council attributes to a new pilot programme introduced last year whereby CCTV cameras were installed by Cork City Council at the bring sites at The Fairfield, Fairhill and Clashduv Road, Togher. Under The 1997 to 2003 Litter Pollution Acts fines are issued for any incidents of dumping .

The wife reckons there’s about 240 working days in the year, including annual leave. I emailed and asked how many wardens there are, and apparently there’s 3 wardens and 1 supervisor. Even if you assume the supervisor doesn’t issue fines, according to my (admittedly terrible) maths…

…the Cork wardens are issuing just over 2 fines a day each? That can’t be right surely? Snowed under with paperwork? According to minutes from 2005 there’s more people to help when needed – 14 back then – so surely not. Is there some other kind of work the wardens do? Seriously, it can’t just be 2 tickets a day like!

* I can’t check because for some bizarre reason their posts aren’t dated!

I’m voting for myself.

Think I’ll write my own name onto the ballot card, stick a tick beside it. I think I can trust myself.

Can I have one with “Fianna Fail” removed? 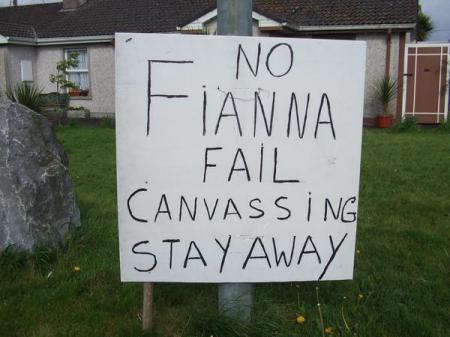 From Laura, via Damien.