Filed under Engineering. Calling this art is like calling Tracey Emin’s Everyone I Have Ever Slept With… uh… art.

There aren’t many web videos that could hold my attention for 12 minutes, but this time-lapse of a tram junction rebuild in San Francisco just captivates. I actually went back to watch them pour the concrete a second time. :)

Researchers at the Max Planck Institute for Biological Cybernetics, in TÃ¼bingen, Germany, transformed an industrial robot arm into a Formula 1 simulator.

Brilliant idea, kit the buses out with capacitors instead of batteries and charge them every time they stop. Read the details here.

The Jalopnik guys are pretty scathing and there’s no really technical details but then who needs ’em!? It’s a massive engine, with a supercharger, and zoomies, in a dinky frame, with 4 wheel steer. It’s awesome! 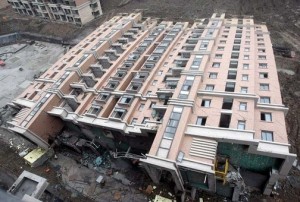 This past Saturday, an entire apartment building in Shanghai collapsed. To be fair, the building was under construction and thus unoccupied, but it’s still a minor miracle that there was only one fatality.

The Russian-built, 10220cc Vedeneyev M14P radial engine was originally commissioned in the 1930’s for airplanes and over the years power rose from 360 HP to a stout 460 HP when electronic injection was added. The Goggomobil was a German-built micro-car, like many ulta-compacts which sprouted up during the post-war era. Its most powerful iteration produced all of 20 HP. The two were never intended to go together, but a German mad man named Uwe Wulf has married radial monster to microcar for what is easily one of the most technically impressive and plain old-fashioned spectacular small car/big engine transplants we’ve ever seen.

More details and photos on Jalopnik.