Letter to the IT in response to James Mackey’s frankly mind-boggling opinion piece on Tuesday. His entanglement of evolution and quantum truly is actually more bizarre than quantum entanglement itself. Links added by me for reader reference.

If “Dawkins’s case against religion creaks at every joint”, then James Mackey’s case against Dawkins (July 12) is splintering and cracking at the seams like a cheap stool under a fat man. He doesn’t appear to have a functional understanding of evolution theory, never mind the quantum theory he is bizarrely tacking on to it; which has about the same logical sense as saying “creationism is true because cows fart”.

If your readers would like to learn the basics of quantum theory, I’d suggest “The Code Book” by Simon Singh, which breaks quantum down in a wonderfully simple way in the context of an overview of “The Evolution of Secrecy”. Mr. Mackey may need to look up “quantum” in the dictionary beforehand. 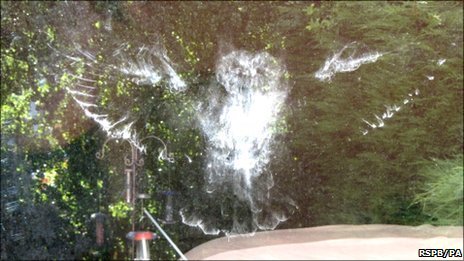 A woman returned to her Cumbrian home to find a near perfect imprint of an owl on her window.

The bird had apparently crashed into the window of Sally Arnold’s Kendal home, leaving the bizarre image – complete with eyes, beak and feathers.

Experts said the silhouette was left by the bird’s “powder down” – a substance protecting growing feathers.

Mrs Arnold said she could find no sign of the owl, so assumed it had flown off without serious injury.